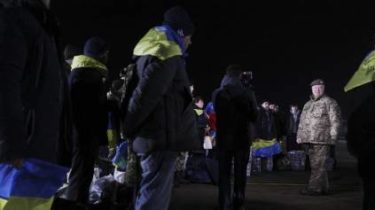 Soldiers released from captivity and brought to the capital was immediately taken to the Kiev military hospital. There men have been screened and met with relatives, said TSN.16.45.

Paul Urbasa terrorists held in captivity for six years. During this time, relatives only once heard his voice. He is now in hospital undergoing tests. And for the holidays the doctors go to his family. My son came home dad. From the first-born that does not depart for a minute.

That should free Paul heard, but not believed. After rehabilitation thinks to return to service.

The blue and yellow flag on the bed, signed in black marker. This is the first souvenir that Nikolai Gerasimenko had immediately boarded a plane with the rescued hostages. Him, warrior, was signed by President Petro Poroshenko. Says, asked for an autograph yet the Minister of defence, but he failed to keep. Not to worry. Says, still facing him. Because remained in captivity the rest of his brethren, who must be freed.

Videobay in the back and ribs: released prisoners said that they are concerned about

Saved all civil and those who fought at the front, was taken to the hospital of the President administration for examination and further treatment. Mainly guys complain of pain in the back and ribs, because during interrogation it was beaten by these places. The children a visit friends and relatives is the best medicine for former prisoners. “Yesterday I asked to the guys though until the New year gave the TV and a sweet something. They love sweets, so that they maintain. It is very nice, I think. Mentally the guys are depressed, those that were left,” says Nicholas.

59 is the number of our soldiers, who yesterday returned from captivity. 24 of them are examined in the Kiev military hospital. Others refused, and went to his family. Almost all the same diagnosis.

The OSCE called for the observance of the ceasefire after the exchange of prisoners. In Europe, they say that we must continue to move towards resolution of the conflict in the East. And the Chancellor of Germany Angela Merkel and President of France Emmanuel Makron in a joint statement called for the release of all prisoners who still remain in captivity. Negotiations on the second phase of exchange of prisoners of Ukraine is in two weeks. Fighters doctors will examine 2-3 days. If the state of health will allow Ukrainian heroes otpustit home for the holidays. After January 9, they should return to their military units.