Visitors to the shopping centre in Canada, was fascinated by the performance of Ukrainian Christmas carols 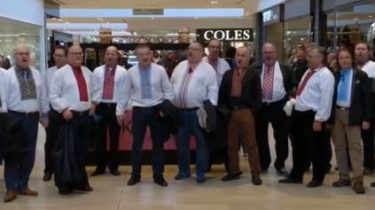 In Canada, Mall visitors got the opportunity to listen to magical Ukrainian Christmas Carol.

It is reported by Voice of America.

Reported that passers-by were fascinated by the performance of about 15 singers in embroidery.

Passers-by gathered around the carolers, filmed and applauded.

His speech colorful performers made up in the Ukrainian language – with the words “Christ rojdaetsya – slavimo Yogo”.

We will remind that earlier the group ONUKA fans congratulated with the Christmas performing “Shchedryk”. Legendary song the band performed at the airport.