“Peace to you!”: military front congratulated all of Ukraine with New year and Christmas

The Ukrainian military last day of 2017 has experienced no losses, but in General, this year the army has lost at the front 199 fighters, 1290 injured. From the beginning of the ATO has killed more than 10,8 thousand citizens, according to a story TSN.19:30.

Directly from the front congratulated Ukraine soldiers, in the position in which to celebrate the New year reporters came to the 1+1. For the defenders of the country brought the so-called children’s champagne, because the alcohol on the front banned as military leave, on duty and need to stay alert and be vigilant not to miss the enemy attacks. The following New year fighters want to meet at home, with their families, in a peaceful Ukraine. “Members of the Armed forces of Ukraine I congratulate the entire Ukraine on the coming New year and Christmas! Peace to you,” he congratulated soldiers of all Ukrainians.

The ATO sees off the old year in complete silence

However, with advanced reminded that fireworks during the war is the most successful form of celebration, because among those who will hear explosions, and military who recently returned from the front. For them, these sounds will not be a joy – on the contrary, familiar with advanced loud explosions associated with life-threatening, which seemed to freeze the heart. So the soldiers all suggest the conscious and conscientious Ukrainians to refrain from firecrackers and fireworks, while they will not reason to use the occasion of the victory over the enemy. To which they promise to join and to bring her time.

Videoboyz in the East wished Ukrainians peace of heaven

The militants four times violated the new year ceasefire in the ATO zone. One injured, no fatalities. On Ukrainian positions beat at Pavlopol near Water and Hnutove. In the Crimean in the detonation of an unidentified explosive device injured one soldier. Doctors say his life is not in danger. In General, in the course of the year, in the East killed 199 of our defenders. 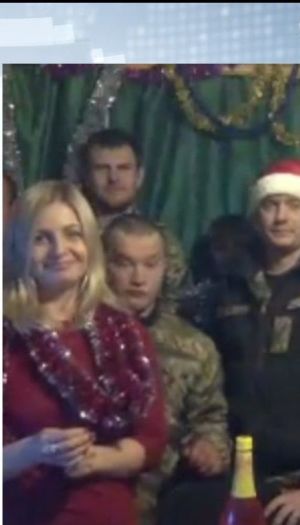