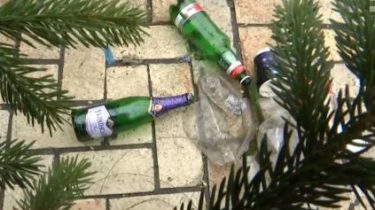 For January 1 of the communal taken from the center of the capital of a ton of empty bottles from-under alcohol. Almost until lunch wipers shoveled the impact of the holiday on St. Sophia square, but at the same time it became clear that the Ukrainians can not only litter, but also to clean up after yourself, says the story TSN.19:30.

People on the garbage Apocalypse, Vladimir reacted differently: some were outraged, someone philosophically talked about the peculiarities of the national character. Offer to take everyone at least one bottle and carry to the nearest garbage can, did not find the response: “I’d love to, but misunderstood”. Then the journalists took one of the janitors trash bag and began to clean themselves, while inviting passersby to join. His own example was much more convincing than words – after a few minutes people joined in cleaning even without an invitation.

Ukrainians ordered to sort the garbage, but some tanks everywhere is still not installed

Spontaneous cleaning has identified the problem: no matter how hard the organizers, for the number of guests the Sofia area landfills was scarce. People who have joined the campaign for cleaning the city center, admitted that this place is not only littered after new year’s eve, however, the experience of private participation in the return to Kiev a beautiful view like all. “If everyone would clean up after themselves – this country would be better, cleaner,” said passers-by.

Tons of bottles of alcohol communal taken after new year’s eve in the capital. Almost until lunch wipers shoveled the impact of the holiday on St. Sophia square. 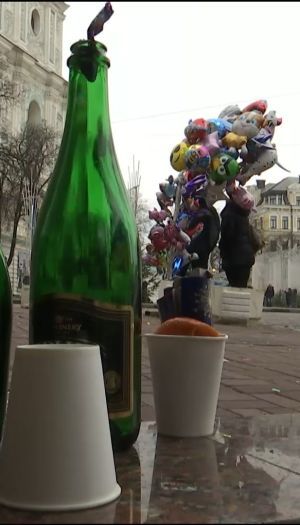