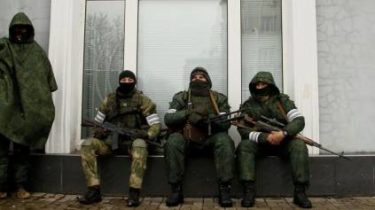 In the Donbass two days of the new year holidays killed 7 militants, another committed suicide.

About it, citing intelligence reports, said the speaker of the Ministry of defense of Ukraine on ATO Col., writes UNIAN.

“Despite the efforts of the Russian occupation command for the maintenance of military discipline in the ranks of fighters, the number of crimes and accidents to the joints and parts of the so-called 1st (Donetsk) and 2nd (Sevastopol), the army corps increased. So, on December 31 in one part of the 1st AK during an argument between officers and their subordinates, as one of the soldiers, while intoxicated, used a hand grenade, resulting in four militants killed, including one officer and two more got wounds”, – he told.

According to Motuzyanik, three drunken Russian soldiers from the 1st army corps on new year’s night decide to use for cooking faulty gas cylinder. As a result of explosion the military were killed.

Besides, January 1, drunken adventure 1 AK made two accidents, resulting in damaged cars. In addition, in the first day of the new year in Lugansk fighters 2 AK tipsy beat civilians who allegedly violated the rules of use of pyrotechnic means in close proximity to the location.

“Also, new year’s eve action from the 2nd AK under the influence of drugs committed suicide. At the direction of command, he was dismissed the previous number – the 28th of December”, – said the representative of the Ministry of defense.

We will remind, the Ukrainian side of the JCCC notes the failure of the leaders of the militants promised to observe the truce. The ceasefire in the Donbas was supposed to come back on December 23.