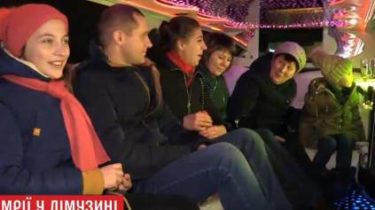 New year’s eve and in the first January morning in Kiev went exclusive limousine from TSN. The fare did not take the money, and confessions – what are the passengers dreaming and how you see the future of Ukraine.

Sophia square in the capital in anticipation of the holiday. TSN also prepared to give the mood. When the city taxi double rate – TSN offers its services. Instead of money, asking people to share dreams. Behind the limousine from becoming a place.

The first passengers – a family with children. From the center in a residential district would have to get on the bus. They called relatives that I heard on TV about the campaign from TSN and advised to look for a Christmas cab.

“We noticed immediately and thought that would be to ride this!”

Most happy Elena. He says he came to the relatives of Vinnytsia region. First, we wanted to look at the main tree of the country. Now he says, better to let the villagers see her in the limo.

“This is certainly not expected! Imagine – will come and will tell! If my friends see me at all.! Will be jealous of. Especially as in the village you will see.”

The family sincerely shares her personal achievements in the past year and plans.

“I graduated from College with honors. It’s truly an event.”

New year’s eve and in the first January morning in Kiev went exclusive limousine. The fare did not take the money, and confessions – what are the passengers dreaming and how you see the future of Ukraine. 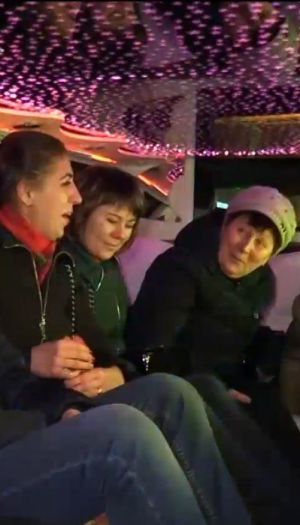 Close to midnight the streets became empty. The pair hurries to the last tram. Anton was a violinist, Anne – the poet. For the New year are creative and not really dreams.

“I’m writing musical instruments. And dream that they created as the Ukrainian instruments, not that I had them to sell for example, in the German company.”

“I dream that in Ukraine introduced the sorting and recycling of garbage.”

But there is also the main dream. Talking about her almost all the passengers.

“A country without corruption.”

Another traditional from all the wishes in the world. Daria and Alexey Zinchenko – military personnel. Passed to colleagues greetings on the front.

Ukrainians greeted the New year – TSN in the morning will know. The first passenger was celebrating in the restaurant. Disappointed.

“At the end of our celebration we set up at twice the expense.”

TSN-taxi compensates for the bad mood.

“I got a shock. You know, it’s interesting that I happened on the New year. I hope I will always be a transport.”

Nurses from the hospital Amosova, the New year was to begin casually. But instead of a bus they get into the limo.

“I’m still Ola said, “If we went by this car, it would be happiness!” So, they say that wishes come true!”.

Among nurses and Gregory Petrik. From Nezhin in Chernigov goes to visit brother in hospital.

About daily routine these doctors will think later. The new year morning, there is still a moment for celebration.

“Val! You take whoever is left there alive, and come to our window – you will see where I am today, a taxi arrived. Look out the window! A white limousine! Val!”, – said by telephone one of the women.

For more details, see the story of Anne hips.