In Kiev burned down a private house: the firemen were able to quickly come because of the lack of addresses on the map 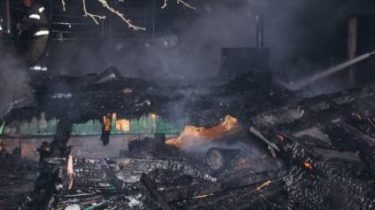 January 2, near the residential complex “Chaika” in Kiev lit private house. The preliminary cause of fire — careless use of homemade furnaces for home heating.

House caught fire at about 20:00. By the time of arrival of rescuers the building almost completely burned down. This “Informant” reports from the scene.

According to neighbors of the fire victims, lived in the house of the dysfunctional family — the husband with the wife. Heard the smell of smoke late in the evening, the neighbors began to carry buckets of water to fires. With a slight delay to the place of fire came two brigades of SSES. As it turned out, firefighters couldn’t quickly find the address on the map, as country co-op has no street name.

“By the time of arrival of rescuers the house was fully engulfed in flames. Moreover, the fire spread to a nearby residential building. We both began to extinguish as the fire, and to prevent the occurrence of fire in another house. A nearby house was saved, but the house where the furnace caught fire, burned completely,” — commented a firefighter.

The spot also came the police and an emergency ambulance. Fortunately, medical help is not needed — during a fire nobody has suffered.

Now in the dacha cooperative the lights went out, the neighbors promise that for ignoring fire safety rules will be served on their neighbors to court.