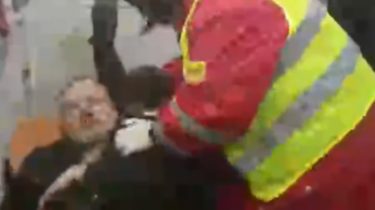 In Kiev at the turn of the Kiev took a drunken accident, one of whose participants became, probably, the judge.

This was a live broadcast from the event in Facebook reported the news portal dtp.kiev.ua.

It is noted that a drunken judge from the scene of the accident tried to take the ambulance, but a car blocked by local residents. It is also reported that the name of the judge, which is expected from the White Church, Usatov. According to the information portal, the judge drank vodka immediately after the accident.

In turn, the second driver in serious condition was hospitalized, his car from the impact flew into a ditch. At the scene working police.

We will remind, on December 27 near the exhibition center on Vasylkivska street in goloseyevsky district of Kiev SUV Land Rover Freelander hit a man. From the received traumas it has died on the spot. Sources have told TSN that the driver was a judge of the court of Vasylkiv, Kyiv region.