The court requires to prosecute the lawyers of Yanukovych 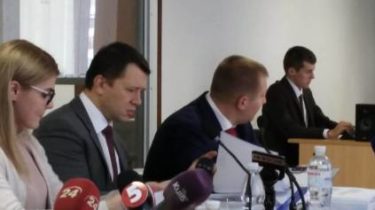 The Pechersky district court of Kiev demands from the Qualification and disciplinary Commission of the bar to raise the question of the responsibility of lawyers the President of the fugitive Viktor Yanukovych Vitaliy Serdyuk, Igor Fedorenko and Andriana Fozekosh for disciplinary violations.

This is stated in the decision of the court in the Unified registry of court decisions.

“The Pechersky district court of Kiev decided to petition the Chairman of the Qualification and disciplinary bar Commission in Kiev a question on the disciplinary responsibility of lawyers of the Attorney Association “Avera Lex” Vitaly Serdyuk A., Fedorenko Igor Luckovich, Fazekas Andriana Andreevna, head of the Law firm “Aver Lex” in connection with the violation of the oath of advocate of Ukraine, the rules of legal ethics and improper performance of their professional duties”, – stated in the decision.

It is noted that the defense of Viktor Yanukovych systematically delaying the trial lawyers violate legal ethics rules, what constitutes misconduct and what lawyers are disciplined.

The court dismissed the claim of Saakashvili against GMS. Protection will appeal against the decision

Also, the court recalled that lawyers Serdyuk, Fedorenko and Fazekas 4 December 2017 brought into the courtroom items that could be dangerous for the audience. Then they brought pre-prepared wooden sticks, paving stones, “Molotov cocktails” in the form of physical evidence for the experiment.

According to the court, the lawyers did not attend the court sessions 12, 18 and 20 December 2017, without providing any justification. Themselves the defenders of Yanukovych said that he was on a mission to discuss the position with the client. Despite the fact that the law firm “Aver Lex” has 14 lawyers and lawyer Bilenko, who is also familiar with the business meeting and still no one came.

We will remind, the lawyer Serdyuk reported that the government is doing everything possible to remove from the process of ex-President Viktor Yanukovych of treason the entire group of lawyers to represent their interests.