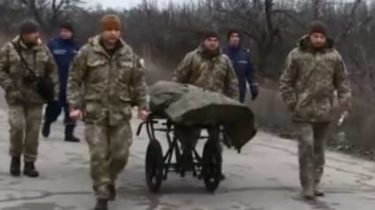 The Ukrainian side was transferred to the temporarily occupied territory of dead bodies, which presumably were members of illegal armed groups. This reports the press center of staff ATO.

The transfer took place in the checkpoint “Stanitsa Lugansk” in the framework of the humanitarian project of the Armed Forces of Ukraine “the Evacuation of 200”. It is noted that the body was discovered in September last year near the city of Happiness. Roughly, they died in 2014-2015. The transfer of the bodies had previously been agreed.

Recall that in the past days, the militants opened fire on Lugansk and Donetsk the directions. One soldier was wounded.