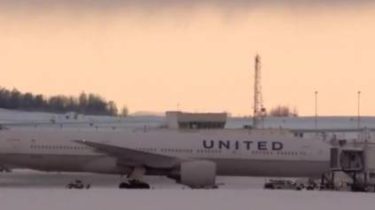 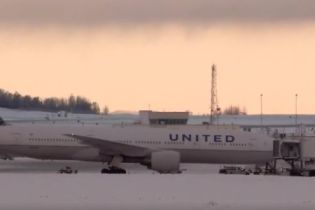 A United Airlines jet EN route from Chicago to Hong Kong was forced to make an emergency landing at the airport in anchorage, Alaska. The Board did not reach the destination 5 thousand miles (more than 8 thousand km) due to unacceptable behaviour.

According to The Voice of Alaska, one of the passengers soiled by feces the walls of the booths on-Board toilets, took off his shirt and then there was trying to get, or even more smeared feces, and then wanted to wash my shirt in the toilet.

“Something wasn’t right with him upstairs,” @united passenger BJ Canup said. “I saw him spreading feces on the bathroom wall with his shirt. He was pouring soda and spitting food all over too” @ktva

Passengers say that not only this distinguished passenger – he also was shaking the seats of the other passengers, scattered food and spilled drinks, and other gadgets.

After the emergency landing, the man was met at the FBI and airport police. It turned out that unusual passenger, which is about 21-22 years old, just two days before the flight, was released from prison in Indiana. Family bought him a ticket to Vietnam at one end, he was reunited with other family members.

The perfect man was not arrested but was taken to the hospital to check his mental state.

Passengers of the Boeing 777 say that the crew was on the ball – they were able to calm passengers and make him sit in his chair before landing. The flight was postponed until the next day, and passengers were placed in hotel.

We will remind, at the Toronto airport one aircraft crashed into the other, after which the fire occurred. The passengers in the accident were not injured, the causes of the incident are still unknown.