In Russia the banner of sotsreklamy portrayed Nazi bomber 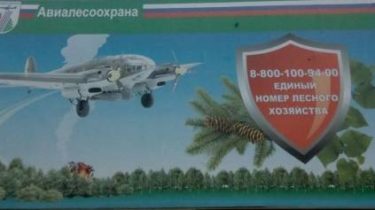 In the city of Kirov, in Russia, drew attention to banner social is state institution “Avialesookhrana”, which depicts a German bomber during the Third Reich, Heinkel He 111, flying over the forest. This was written by user of the portal orfosvinstvo in the name UncleDre.

“Hanging for four years, as it does not bother anyone”, – he wrote. And added that, if you look closely, it seems like the plane just dropped bombs.

Other users joked that instead of the He 111 would be possible to visualize, for example, Battlestar from the Saga “Star wars.”

He 111 was the second mass bomber of Germany in the Second world war. And it was also used by the Luftwaffe as part of the Legion Condor during the civil war in Spain.

Recall, a few years ago, the Estonian gas company has made an advertisement in the ovens of Auschwitz. The company GasTerm posted on its website the concentration camp, writing: “Gas heating is convenient and effective”.