C14 activists blocked the entrance to the monastery. Had a quarrel with the Abbot Paul 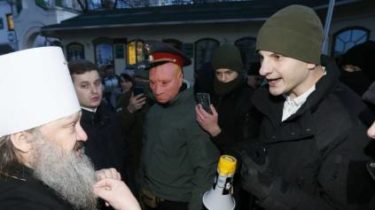 Activists of right-wing organizations C14 with banners “Down with the FSB” staged a rally near the Kiev-Pechersk Lavra, blocking the entry into its territory. To him came the Abbot of the monastery Paul.

Activists blocked the gate, entered verbal skirmish with the visitors and parishioners of the Ukrainian Orthodox Church of the Moscow Patriarchate. Subsequently it went to the Kievo-Pechersk Lavra, Paul.

#prineslo: near the Kiev-Pechersk Lavra journalist bothered to take pictures as the priest throws the toy after the scandal of the Church

Representatives C14 accused the UOC-MP, in cooperation with Russia and support of separatists in the Donbas.

“I wasn’t at war and won’t say who is fighting (Ukraine – ed.) but know what each other has and no one knows who is who,” said Paul activists after their words about the war of Ukraine with the Russian army in the Donbas.

Then the radicals began to ignite the fire, and Laura was about 25 priests and began to sing.

At the scene are law enforcement officers.

We will remind, in Zaporozhye near the Holy protection Church of the Moscow Patriarchate unknown beat two fighters of the ATO, which brought back a toy.

Action #prineslik began in Zaporozhye after the tragedy, which happened on December 31. 39-year-old man opened the window on the 8th floor and made his last step. Just at the moment when from the house came the father with a two year old son. The suicide fell directly on the boy. To save the child, doctors could not.

To say goodbye to a child came dozens of people, but the priest who was invited in funeral service, refused to read the burial service of the deceased. He reported about it to parents just before the burial when he learned that the child was baptized in the Kyiv Patriarchate.

The child has read the burial service. The priest of the Kyiv Patriarchate, which managed to find the parents who came to the funeral from the other end of the city. But Moscow priest despite furious outcry continue to defend its position.

Enraged by the act of the priest, the people began to bring onto the porch of the Church toys in support of the boy’s parents.