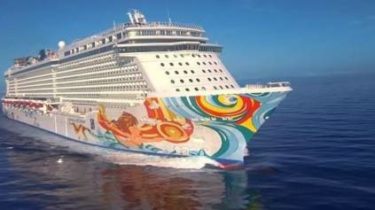 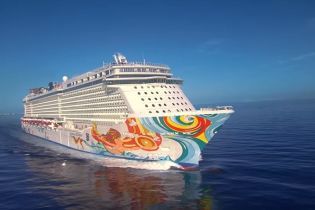 In the Internet appeared the video, shot on a cruise liner Norwegian Breakaway, which was in “cyclone bomb”. Element, until recently, raged at US and caused a lot of harm.

As noted, the ship was heading from new York to the Bahamas across the Atlantic ocean. On Board were more than four thousand passengers, which for three days were not the simple.

Video is assembled from fragments taken by passengers. It is clearly seen as a giant ship rocking on huge waves. People say that the water was everywhere. She poured the deck on which it was impossible to move freely. It was dripping from the ceiling and seeped through the closed doors.

The staff of the liner were trying to get rid of the water. Everything was covered with extra blankets, towels and even a Bathrobe, but it still didn’t help.

Worse “Lucifer”: after a hot cyclone Europe attacked by a powerful storm

As previously reported, in early January, the Eastern coast of North America have suffered due to the storm Grayson, which is called a “cyclone bomb”. Extreme weather caused the deaths of dozens of people. In several coastal States wind raised high tidal wave that flooded the streets. A number of airports, in particular airport. Kennedy in new York had to close. And about 100 million Americans for the first time in tens of years suffered from unprecedented frosts.