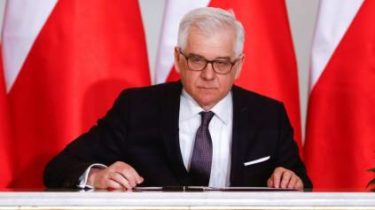 The new head of the Ministry of foreign Affairs of Poland Jacek Czaputowicz expressed hope for soonest settlement of the problem of historical issues in relations with Ukraine.

This is stated in the message the Ministry of foreign Affairs of Poland.

His first telephone calls to the post and Czaputowicz held with the foreign Ministers of Hungary and Ukraine.

“Czaputowicz confirmed Poland’s commitment to the sovereignty and territorial integrity of Ukraine and stressed that Poland will continue to support Ukraine’s European aspirations. During the conversation, he also expressed hope for the early solution of problematic historical issues in the relations of Poland and Ukraine”, – stated in the message.

As already reported, Ukraine and Poland have agreed onthe establishment of a Ministerial Committeethat will deal with the solution of the historical conflict between the two countries, said the President Poroshenko during the briefing in Kharkiv.