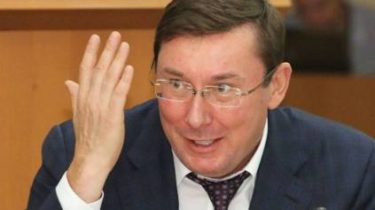 The GPU is no longer “punitive post-Soviet monster”.

“Today, to imagine a situation where the attorney General or the Deputy, or the regional Prosecutor gives the command to destroy business or politics, and this is done through the internal structure of the post-Soviet monster, impossible. Why? Neither I nor my deputies can’t neither remove nor appoint,” – said Lutsenko in the comment to the edition “New time”.

Lutsenko added that appoint to posts and dismiss “only the government”, and he just signed these decisions.

Video”I live in harmony with his conscience”: Lutsenko told about his activities in law enforcement

Among the achievements of the attorney General also called abolition of the right of the Prosecutor to perform the functions of investigation, the reduction of the GPU in the quarter, higher wages in half and filling the majority of vacancies in local Prosecutor’s offices new staff “outside the system”.

Another achievement Lutsenko said the trial of the former President-the fugitive Victor Yanukovych on charges of treason. “Because it’s not just the process of citizen Yanukovych. This process is for all former and future heads of state. In this country it will not be the post that makes it impossible to punishment for crimes,” – said the Prosecutor General.

He also describes the extremely important “the fact that up to 80% of the cases of independence are proven” and 240 direct perpetrators of the killings or violence on the Maidan against the demonstrators in court. At the same time, the attorney General has recognized that customers of these crimes, “secondary and tertiary level,” hiding in Russia.

“For them, through the Parliament, we started the process of conviction,” – said Lutsenko.

The achievements of the GPU, he also took the fact that his Agency is “legally prescribed possibilities to substitute a shoulder in activities of NABOO”.

According to the public Prosecutor, in the course of the year “we are not only detained more than 9 thousand corrupt officials, not only gave approximately 3 million cases in the courts, but also received 1.5 thousand sentences”.

At the same time, the reason for their own mistakes Lutsenko calls the rush.

“For example, the first attempt to create internal anti-corruption policies have been naive. She did not come out. It turned out that it is necessary to create the General Inspectorate for the United States, at the second attempt we made it” – he brought the example of failure.

The attorney General also said that “he let himself be drawn into discussions with the NEB”.

“I was the initiator, but I have to admit that the loud public controversy caused damage to the entire system. Fortunately, recently Sytnyk was in this office, and he admitted it and I admitted it. Now we try to find similarities in our different vision of the law. I can’t shut up when they see a violation of the law, but, on the other hand, you can do it very loud or very loud. I think it was very loud though provoked, but the mistake,” – said Lutsenko.

Recall that in late November between the NAB, the Prosecutor General and the SBU conflict broke out. Employees of special services have detained an agent of the Bureau, working under cover, during the attempt of taking a bribe. The NAB in turn have accused the PGO and SBU to the failure of covert operations to identify corruption in the state migratory service.

Lutsenko said that the agents of NABOO, who work undercover, illegal group. He also sharply criticized the activities of the NEB and its Director in Parliament, accusing the Bureau of violations of the law, and rush is that he started a campaign against the GPU abroad.

Later, however, Lutsenko said that it was a mistake to endure the conflict with NABU in a public plane.