“Bad day”. The Network has revealed the history of the first viral videos in history 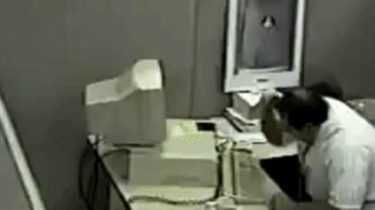 The first viral video of the Internet took off in the U.S. in 1997 – the footage shows a man furiously smashing his computer at the workplace.

Wired reports that a video called “badday.mpg” (“bad day”) more than 20 years ago, distributed by e-mail and via CD-ROMs. Created the first viral video, the company Loronix. She has developed technology DVR surveillance systems and needed shots for example in order to demonstrate to customers their capabilities. Then the employee Vinny Licciardi and chief technologist Peter Jankowski took analog video camera and started shooting.

First they wanted to hide a camera in the ATM machine and allegedly to remove as, Licciardi robbing the warehouse, but he decided to try himself in the role of a disgruntled employee. For shooting used computers that no longer functioned.

To remove, as an office employee works, and then smashes a keyboard and monitor, had twice because the people in the room couldn’t contain his laughter.

Video converted to MPEG-1, that it works better in Windows Media player and covered the greatest number of people. After that, he placed them on promotional CDs, gave them at exhibitions with brochure from the company and forgot about it. In the next year video “badday.mpg” began to spread through various companies via e-mail.

The end of the year. YouTube put all the viral videos in one video

The Riccardi realized that was the star of a viral video when he talked about this neighbor on the plane.

“I was on the plane, talked to the guy next to me told him about my video. And he said, “I saw it”. And the guy behind me also: “I saw it too,” and the stewardess said,” Oh, Yes, Yes, Yes, Yes, I saw it.” It’s amazing how many people saw it,” recalled the hero of the video.

The movie remains popular and still – it can often be seen in social networks in the form of gifs.