The Shabunin Affair. Police resumed the investigation into the beating of a blogger 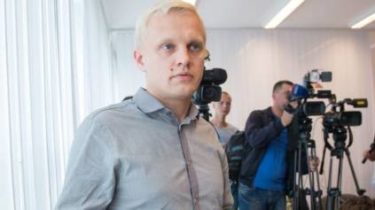 The police six months later, reopened the case about beating by the head of the Center of counteraction of corruption Vitaly Shabunin by the assistant Deputy Vsevolod Filimonenko and preparing a new suspicion.

About it reported in a press-service of CTC.

“Immediately after the winter holidays, the investigators of the police of the Dnieper came from with new strength for the “case Shabunina”. Today, January 15, in the premises of the Dniprovskiy district police Department was scheduled for simultaneous interrogation of the head of the anti-Corruption action Center Vitaliy Shabunin and assistant Deputy Vsevolod Filimonenko. The questioning was organized at the initiative of the Filimonenko,” – said in the message.

According to activists, investigators during interrogation planned to prove that the assistant Deputy was a journalist who was beaten said to be imputed to antikorruptsionera heavier article of the Criminal code.

According to the CPC, Filimonenko turned the interrogation into a farce and came at him with a “support group” with their associates, who go everywhere with him.”

“Brought in for questioning chocolates and began to distribute them to all present,” – said the lawyer of the CTC Elena Serban.

Recall that the story began in August 2017, when the head of the Center of counteraction of corruption was given a summons three soldiers, accompanied by guys with a camera. Shabunin assured that he is unfit for service for health reasons, and call the recruiting office has organized one of the officials. After that, antikorruptsionera came to the Dnieper in the Kiev military registration and enlistment office to find out why he received a summons. Near the building he had a verbal altercation with an activist blogger from Luhansk region by Vsevolod Filimonenko, who subsequently sprinkled Shebunino in the face from a gas spray.

16 Aug Shabunina declared a suspect under article 122 of the Criminal code “Intentional moderate bodily injury”, the maximum penalty for which is up to three years of restriction of freedom. As explained in the Prosecutor’s office, police checked, involved Filimonenko to journalistic activities.

Guilt said partially admits. Suggests that beaten ascribes to extra damage, and wonders why it found a fracture on the left side of the face, if the blow fell on the right. “The fact that I hit the person is. I admit it, but I did not hit a journalist, and provocateur, defending his colleagues,” – said antikorruptsionera.

Something about the professional background of the victim and worried investigators – per night business retrained, and Filimonenko it is no longer a journalist. Article sanction was reduced to 3 years in prison. Subsequently, the court dismissed Shabunina under the personal obligation. Dissatisfied with the court is left with both the blogger that he was not recognized as a journalist; antikorruptsionera that the case against him specifically untwist, to put pressure on the Center of counteraction of corruption.