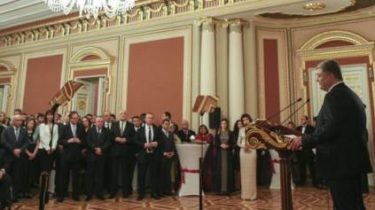 During a meeting with ambassadors of the countries, President Petro Poroshenko has indicated that Ukraine has “a special place on the map of Europe. It was here decided its future.” And Russia’s policy is based on aggression, lies, manipulation, repression and stifling of freedom of speech.

“Unlike the events of a century ago, today we have everything in order to defend the truth. We have built a strong, democratic and United nation with a growing economy, and a strong and Patriotic army. We have an unwavering unity and solidarity with the world against aggression,” – said the head of state.

He thanked the foreign ambassadors, who are partners, allies and friends of Ukraine for their struggle “for peace, welfare, prosperity and European future.”

“Democratic values cannot be subject to bargain and compromise. And attempts of appeasement always lead to an increase in his appetite and aggression. Therefore, the need for a tough, uncompromising response to those who violates the rules of international law today is clear,” the President said.

Poroshenko stressed that “the Kremlin can never be trusted, under what modes they would conceal – tsarist, Communist or pseudo-democratic. History shows that aggression, lying, manipulation, repression and suppression of freedom of speech – one way or another are present in different forms that state. The most effective guard against the revival of the Imperial ambitions and appetites of Russia is a democratic, successful and independent Ukraine. Everything Russia is doing today in Ukraine, has only one goal: to get us in their so-called “sphere of influence”, to destroy the Ukrainian state as such. No country in the world has not faced such a big challenge and at the same time were able to achieve results on the front to counter Russian aggression, and at the front the necessary reforms. And without the support of our international partners to implement this would be impossible.”

The President reminded about the liberation of the hostages before the New year.

“Nothing is impossible when we all combine our efforts and speak with one voice. Christmas release of the Ukrainian prisoners – is a vivid example. This year we will work for a speedy return to Ukraine other Ukrainian hostages and political prisoners”, – assured Poroshenko.

He also told about the priority reforms in Ukraine to 2018 is privatization, deregulation, and improving the investment climate, the creation of the National Bureau of financial security, liberal currency laws, national security and other areas.