The Verkhovna Rada resumes. Parliament is going to start with the reintegration of Donbass 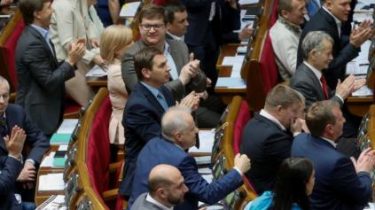 Verkhovna Rada today, on January 16, takes on the job. To start the MPs are going with the bill on the reintegration of Donbass, which was supposed to take last year.

The presidential faction confirmed that intentionally postponed, for fear to complicate the process of releasing Ukrainian hostages, which took place at the end of December. MPs made several hundred amendments to the bill.

Meanwhile, human rights activists say that some of the edits in the document violate human rights. In particular, we are talking about increasing the powers of the security forces, which can, for example, free to enter into the homes of citizens or to use their private transport.

In Parliament predict that today the bill can be adopted by the Verkhovna Rada finally.

October 6, the Verkhovna Rada of Ukraine voted for the bills that define the future of the occupied part of Donbass. So, in the first reading the Parliament adopted the presidential bill on the peculiarities of the state policy on ensuring state sovereignty of Ukraine on the temporarily occupied territories in the Donetsk and Lugansk regions (No. 7163). Also Pleased to extend the special status IDLO under the bill 7164 “On creation of necessary conditions for the peaceful settlement of the situation in certain districts of Donetsk and Lugansk regions”.

Videobr in the first reading supported the reintegration of Donbass