Fighters day observed the truce, and in the night shot at again. Chronicle of the ATO 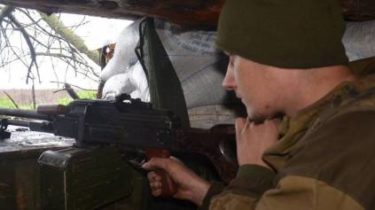 For 18 January in the area of ATO in the Donbas have been two fire fighters. In the bright time of day, until 18:00, there was no shelling, and then in the dark season began provocation.

“In spite of the mutual observance of the cease-fire throughout yesterday, the Russian occupation troops, in the dark, still resorted to the insidious provocations and made attacks of positions of Ukrainian Armed forces of weapons prohibited by the Minsk agreements”, – stated in the headquarters of ATO.

On the Lugansk direction militants fired 82-mm mortars on the strong points close to Happiness. Also from a mortar of calibre of 120 mm was shelled positions near the village of Lugansk.

“In both instances, the Ukrainian military return fire was not opened. As a result of enemy shelling one of our soldier was killed and one was wounded”, – stated in the message.

Note that during the engineering works at the direction of Donetsk received a combat injury to one soldier of the Armed forces of Ukraine.

“It was immediately taken to a military hospital and was given necessary medical help. Life of the Ukrainian soldier is not in danger. Military doctors described his condition as satisfactory,” – noted in the press center of staff ATO.

Meanwhile, Kuchma announced the date of the next negotiations on the Donbass.