Nasirov applied to the Minister of Finance in the GPU 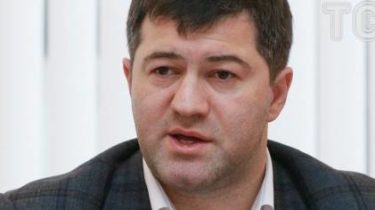 The dismissed Chairman of the State fiscal service of Ukraine Roman Nasirov called the submission to the Cabinet of the Minister of Finance Alexander danyluk regarding his dismissal as illegal and filed a complaint about the crime.

“It is a violation of the law. Just as he violated the law when he filed a statement regarding my removal from duty of the head of the SFS,” said he, adding that filed for Danilyuk’s statement to the Prosecutor General of Ukraine.

In addition Nasirov once again denied the presence of his British passport.

“Let them show it. There is no passport. Have you seen it? This letter (from the British side – approx.ed.) nobody saw it”, – assured suspended the head of the SFS.

Earlier, Finance Minister Alexander danyluk has announced that it has submitted to the Cabinet a submission on the dismissal of the Chairman of the State fiscal service of the Roman Nasirov.

Note, Nasirov is suspected of abuse of office and embezzlement of public funds in the amount of over UAH 2 bn. The consequence considers that Nasirov, acting in the interests of the Deputy Onishchenko, the “gas business” were arbitrarily granted a number of enterprises the possibility of tax liabilities in installments.