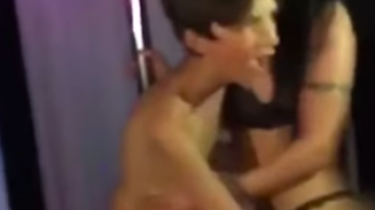 The Network spreads the video of the unusual birthday celebration of 12-year-old boy. The fact that his father ordered a celebration of the two strippers , and, judging by the video, the guy was a little embarrassed by this.

Actively spreading the video to YouTube and various social networks. It shows how two strippers dressed in black lingerie, dancing around the boy.

In Russia, the exasperated customer was invited to “Sberbank” strippers to teach the staff

During the dance the women put the boy’s hands on his chest and other parts of the body. All this happens in front of friends and relatives. The boy’s father standing nearby, smiles at, encourages strippers to act more uninhibited and encourages his son.

The name of the man was not reported, but identified him as an eccentric millionaire, says the Spanish news site La Vanguardia.

Video of the birthday celebration quickly went viral and many users in the comments condemned the father for the gift of his son.

We will remind, in the USA mom as a gift ordered your 8-year-old son Striptease. Video adult stripper in pink lingerie dancing on the lap of a boy. Video gets thousands of views and thousands of negative comments. People are outraged that affords mother and believe that a woman should be throw in jail for corruption of minors.