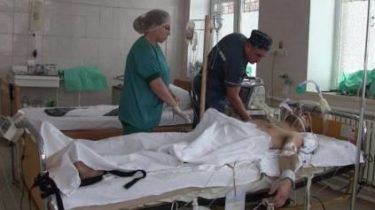 Ukrainian military doctors saved the life of an enemy saboteur, which the militants left after a collision on the battlefield in the area of ATO, says the press center of the ATO.

As it became known, on January 19 in the area of Shirokino, the enemy sabotage-reconnaissance group are very close to the positions of the Ukrainian military opened fire. The Ukrainian military were forced to respond. Militants began to retreat, but one of his left over wounds.

Our soldiers had ENU necessary medical assistance and was taken to the hospital.

Seven hours fought for the life of the saboteur of Ukrainian military doctors. He is now in intensive care in serious, but stable condition.

The soldiers are saying that the gunman was wearing the uniform of the Russian military, which is called “duckweed”.

Donetsk militia returned people to the past by turning all landline

Yesterday, January 20, on the arc Svetlodarsk was defeated position of the militants “Adidas” on strategically important height, from which the terrorists are constantly shelling positions of the Ukrainian fighters.