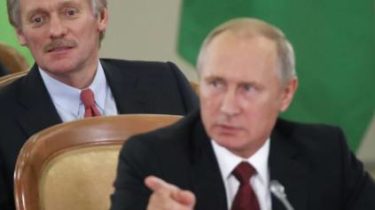 Press Secretary of the President of Russia Dmitry Peskov denied information about the meeting of Vladimir Putin with President of Ukraine Petro Poroshenko, which are not officially reported.

“No one of any meetings and did not speak,” – said Peskov in an interview with TASS. “In an interview I said that such meetings were”, – he stressed.

Putin’s spokesman, Dmitry Peskov, on Sunday the TV channel “Rossiya 1” responded to the question about contacts between the Russian President and Poroshenko. RIA Novosti, citing Peskov, wrote: “Such meetings take place, we do not share”.

Later, the Agency corrected the note, removing this quote. Now it says, answering the question about contacts and Putin Poroshenko, Peskov said that “we have the” international meetings in General, which the Kremlin said.

“Joking, not to quarrel”: the Russian media reported about the secret conversation Poroshenko and Putin

In the evening, 21 January, the TV channel “Russia 1” has published the full interview Peskov. Leading asked the press Secretary of the President of the Russian Federation, when Putin last spoke with Poroshenko, “because last year was such contact, which the press reported only a few months”, reports “Rain”.

“The President has a huge number of meetings and contacts, which are not of a public nature, which we do not share a common practice. And when you see the intense labour President’s day, which consists of a dozen different working meetings, press conferences, statements and negotiations, this does not mean that the President’s schedule is limited to them. It is much more intense and meaningful than what you see on TV. Therefore, they do have a meeting place that we don’t reported by the media,” — said Peskov.

Klimkin told, under what conditions can a meeting Poroshenko and Putin

In clarifying questions leading on telephone calls Putin’s press Secretary said that “there are different telephone conversations, which we do not make official reports”. About contacts between Putin and Poroshenko, he said.