Italian wine for politicians and complexes from points: Parubiy gave a Frank interview to TSN 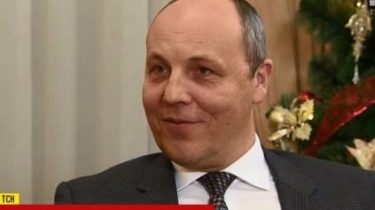 Kitchen in the apartment of the speaker of the Verkhovna Rada adopts the leading politicians in the days of important votes or Thursdays when completed the main work in the Parliament. In those days, Andriy Parubiy regales guests with white wine, says the story TSN.19:30.

“Actually ride more during the voting. Very often, even during the vote comes the Prime Minister, can come Yatsenyuk. As a rule, after voting with the exhale. We meet usually here we drink coffee. On Thursday evening there is a tradition of white wine – by the glass. Mostly Italian, frankly. Italian is the most popular among friends. Cheese sandwiches, ham – a little bit because everyone is trying to eat less flour”, – told about the meetings, the Chairman of the Parliament. According to him, they talk about stuff. “It is very rare that we are discussing something other than politics. It already happens much later,” he said. “The last budget I remember Groisman, Yatsenyuk, Avakov, Bourbaki, Gerasimov” – he listed his guests after a successful vote the estimates for 2018. Parubiy claims that the wine for their bar purchases. “That’s when Thursday night… We are going I tell them: guys, Thursday night. In fact, polls on Friday anymore. And so at the end of the week – all the while the tension, the incredible tension… It’s such a relief,” explained the speaker.

Andriy Parubiy showed TSN secret kitchen in his office, where the night is going the direction of our state. The speaker also told how to relate to the jokes “Quarter 95” and complements any peculiarities of diction. Parubiy admitted that responds to humor, but jokes about themselves in the performance of “95 Quarter” means not always. “It’s not easy to react, to be honest. When last year, on New year’s eve, they were given the scene where I’m with the President, then to me there was a lot of calls. Perturbed, I say: Andrew, you should give a public response… can’t say that it’s nice, though, my daughter is happy. She comes in and says, “Dad, you again laugh on TV,” said the politician. However, he says that the joke among colleagues are quite commonplace. “Very often we banter. We can argue what the best speaker, because we are sometimes going to four speakers simultaneously,” – said the head of Parliament.

Coalition and ex-regionals: Parubiy commented on the possibility of a rematch in Ukrainian politics

The Chairman of the Parliament claims that did not go not courses of oratorical skill and not engaged in specifically to improve their diction. “No, I never did. I know that my childhood, there are certain problems, not so large, as shown by “Quarter”, but there is. Try to speak slower and clearer, especially when I’m driving session. And glasses are not my joy, for me it is a such a complex. Raise your hand – I know that there are Alekseev, or the anointing, and can’t understand one of them raises his hand. Sometimes this strange effect when wearing glasses – the impression that everyone’s looking at me! Because I was sitting without my glasses and haven’t seen them so close,” he said.

Parubiy did not deny that is a temperamental man, but learned to master his emotions. “I sometimes just breaks inside already! In the old days just did: I called to fight three rounds of three minutes. I have for many years practiced martial arts: Boxing, kickboxing, karate”, – he explained. For street fighting, according to policy, most benefits can be derived from Boxing equipment, but for the Verkhovna Rada speaker tips no. “And the Verkhovna Rada impossible to fight! This is only impolite MPs do. A polite no fighting,” – he concluded.