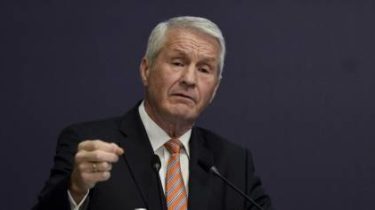 He stated at the PACE session in Strasbourg on 22 January, reports “European true”.

According to Jagland, it is necessary to change the rules of the Assembly in such a way as to “bring on Board” all the “problematic” member countries of the organization.

Under harmonization Jagland understand the removal from Russia of the sanctions that were imposed over the annexation of Crimea and aggression in the Donbas.

According to Jagland, PACE should remain in the country until they do not violate article 4 of the European Convention on human rights. The Secretary General of the Council of Europe called the four principles defined in the Charter documents of the COE that can not be broken even under extreme circumstances. It is the prohibition of the death penalty, torture, forced labor, or slavery, and extrajudicial punishment. All other violations of the principles of the Council of Europe, according to Jagland, do not have such influence.

“This does not mean that everything else can be broken. If there are violations of other articles and systematic unwillingness to fix it – member country can apply to the ECHR regarding the implementation of its commitments”, he said.

According to Jagland, the idea of the Council of Europe is to protect people, despite the violation of the Convention by its members.

“The fundamental idea is to preserve a common legal space (on site, in 47 countries, including Russia), for the people. We must not forget that for many on the continent, the Convention and the ECHR is the last hope,” he explained.

Russia will not return to the PACE this year – Gerashchenko