New trenches and even more mining. OSCE declares about the preparations for the escalation of the conflict in the Donbas 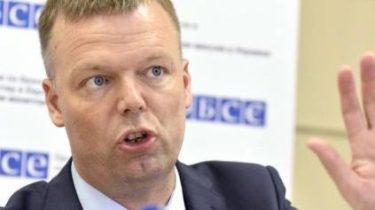 The parties in the Donbass armed and actively undermine the territory, which indicates the escalation of the conflict in the near future.

This was stated by first Deputy Chairman of the Special monitoring mission of the OSCE Alexander hug during a press briefing on Tuesday, January 23, reports Ukrainska Pravda.

He noted that the militants and military APU actively digging along the line of demarcation.

“Our drones have recorded a lot of new trenches. The two sides have been digging. Everywhere we see a significant number of weapons in the trenches and dugouts,” said hug.

According to him, the parties do not adhere to the Minsk agreements and lay more mines instead of demined areas.

Representatives of the OSCE recorded military equipment, which stands on the firing positions from both ORDO, and the government-controlled Ukrainian territory.

“Everything suggests that the parties are preparing for a new conflict intensified in the near future”, – said Hg, and adds that a large accumulation of technology is observed in Moscow and in Viktorivka.

The OSCE noted that currently the Committee is concerned about the situation in Svetlodarskoye arc and in the village of olenivka, where on Sunday an explosion killed one person from the civilian populationand wounded another.