It became known what he was talking about Poroshenko and Walker 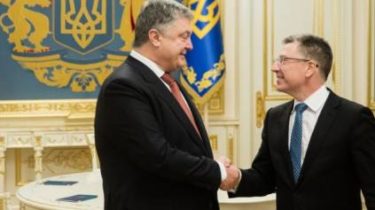 Russia must finally demonstrate political will for a peaceful settlement of the conflict in the Donbass and to agree to the placement of the peacekeeping mission in the occupied territories of Donetsk and Lugansk regions.

The parties expressed serious concern with the lack of progress in the implementation by Russia of the security provisions of the Minsk agreements. It was noted that the absolute priorities are the consolidation of sustainable and comprehensive ceasefire and withdrawal of Russian occupation troops Ukraine.

To Ukraine arrived the special envoy of the US state Department, Walker

Among other things, Poroshenko and Walker noted the release of Ukrainian hostages in the end of last year and the importance of completing this process.

Reference was also made to the adoption of the Law on reintegration of the occupied territories as part of an overall strategy for restoration of the sovereignty and territorial integrity of Ukraine.

Poroshenko and Walker emphasized the priority of peaceful political and diplomatic settlement of the situation in the Donbass.

We will remind, on January 26, the US special envoy Kurt Volker plans to meet with Russian presidential aide Vladislav Surkov. The meeting will be held in Dubai. Earlier he said that the negotiations and the peacekeeping mission with Russian presidential aide Vladislav Surkov was not fruitful, but in January, things can change.

”I still hope that we will be able to achieve, and that Russia wants to solve all of these issues and to restore the territory of Donbass for Ukraine. In this sense, our November meeting was a disappointment that we have not made progress on this issue. But we hope to hold a new meeting in January. And I hope that we will then be able to make progress. Look,” he said.