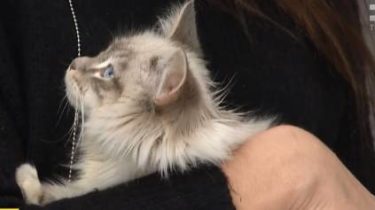 Cat with bright blue eyes left in the lurch right at the capital airport. Her owner just before leaving found out that permits for the transportation of the animal is not enough, and without hesitation took the only things in the plane, according to a story TSN.19:30.

This case has shaken even the old-timers of the airport. “There were cases when animals were not allowed, but that the hostess threw the animal at the airport – this is the first time”, – says the head of the press service of the airport Galina Bogdanenko. The passenger came to check-Belarusian airlines in Minsk without carrying and documents on the animal. Airport workers say that usually in similar cases, the people you call your friends and ask that they came and took the animal to overexposure to yourself and sometimes even have time to go to the vet and paperwork. However, the owner of this cat did not think long. “The cat put on the table and said, do what you want with it. If I can’t take it I don’t need,” – said Galina Bogdanenko.

A scared animal hiding in the information Desk and stayed there for three hours. “We had Catnip, we smeared a little bit – after about 10 minutes came out,” says the administrator terminal Marina Pavlenok. Among the staff there were experts in cat and a light gray coat and bright blue eyes found the breed – Neva masquerade. New owners for the animal began to search in social networks – and after 10 minutes responded one of the leaders of the airport. Sergey Kolesnik decided to call the cat Juliana, because it is called the tower at the airport because the airport has become a place of meeting. “Now we go to the doctor to see what was happening, that all was well”, – told about the first plans of the new owner.

Videohosting abandoned at the airport cat was replaceable head airport

Cat with bright blue eyes left in the lurch right at the airport. When the owner just before leaving found out that permits for transportation of the animal is not enough, without hesitation, she took only clothes and got on the plane. The new owners started looking into social networks. 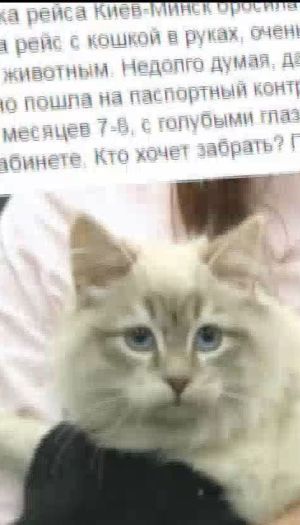