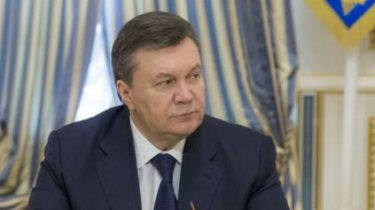 Deprived of the title of President of Ukraine Viktor Yanukovych together with his younger son Viktor on the night of 23 February 2014 taken from the Zaporozhye region in the Russian military helicopters.

This was during the interrogation in the Obolon district court of Kyiv said an employee of the state security Department Oles Sharan, writes “Ukrainian truth”.

“We moved on two cars. On departure from Donetsk, we were joined by Victor Yanukovych. The Bernadsky (the other guard Yanukovych – approx.ed.) was the phone with someone called. He said that in the area of Melitopol they were waiting for us we cannot go there. He got out of the car, they discussed it and then moved on minor roads off the light,” he said, adding that the removal of Yanukovych said the head of the presidential guard of Ukraine Kostyantyn Kobzar.

According to the employee, HUGO, February 23, at about 3 a.m. the motorcade stopped near agricultural fields somewhere near Melitopol, on which sat 3 military helicopters, which Yanukovych, his son Victor and the guards flew out of the Ukraine and reseeding in the Russian Anapa on the airplane, landed in the Crimea.

“In the Crimea we were met by about a platoon of military of the Russian Federation in green, they drove cars (trucks, type “Ural”), we went in an unknown direction. He came to Yalta – the resort of the Navy of Ministry of defense of the Russian Federation. There we were till evening. The President gave the command to prepare dachas “Wisteria” (Crimean boarding house, known as the summer residence of Leonid Brezhnev – approx.ed.). It turned out that it does take a lot of time, as it was closed for the winter. After that we Packed things and went to Sevastopol,” – said Sharan.

Then, as noted by the PAROLE officer, on the territory of the military unit of the Russian Federation, Yanukovych set up the guards, thanked them for the service and asked who will continue the path with him, and he wrote a refusal from the state security and flew from the Crimea.

In turn, the guards who decided to stay with the fugitive, wrote a letter of resignation and handed over their weapons.