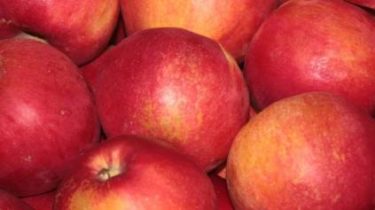 On sale in the UK and Scandinavia there was a Ukrainian apples. This has caused concern in the Polish gardeners, who are the main suppliers of apples to European countries. They believe that Ukrainian manufacturers are gradually superseding them with the European market.

Ukraine intensively increases the production of apples, and growers are working to improve the quality and effective promotion of their products on the market, hoping to compete in the market their competitors from Poland and Italy. About it writes portal sadyogrody.pl reports “info-SHUVAR”.

“Because of the significant reduction in crop demand for Polish products would have to grow rapidly. However, this has not happened because of Ukrainian Apple”, – said the President of the producer group La Sad Michal Lachowicz.

The President of the Union of gardeners of Poland Miroslaw Maliszewski believes that the Ukrainian products will be able to press the Polish and notes that the main market for Ukrainian Apple is the East and the former Soviet countries.

“The logical market for Ukraine is the East, not the West. Ukraine may export products to Russia because they do not fall under the embargo. Also Ukrainian products covers more of the post-Soviet markets. I do not believe that the Ukrainian Apple can compete in the Polish market,” said Maliszewski.

In Ukraine is rapidly rising prices for traditional vegetables

Note that Ukraine is among the countries against which Russia imposed an embargo still in 2014. Until September 2015, Ukrainian and Polish apples went to Russia via the Crimea, but after the blockade, this supply ceased to exist. Therefore, Belarus has become the main official foreign export market for apples from Ukraine and Poland.

Under these conditions, the producers of both countries began to seek alternative channels of supply: Poland began to increase exports towards the countries of Western Europe and Africa, Ukraine is also beginning to look towards the EU. However, Apple exports in both countries are still significantly dependent on the demand in the CIS countries.

“Ukraine is not the first year is attempting to enter the EU market with its Apple. A year ago, it was predominantly industrial organic apples for juice production. This year we significantly increased export of raw materials to the EU and made the first attempts to go with dessert Apple on the market is quite demanding European countries Scandinavia and great Britain. Not everything goes smoothly, but no one expected that familiarity with a new market will be easy. I’m sure the next few years Ukraine will try to conquer the EU market, because without the export of Ukrainian Apple business cannot exist, and the Russian market remained officially closed for us. But in the short term we are unlikely to create significant competition for the Polish gardeners in the EU. We still have quite a few farms that have the appropriate certificates and even fewer of those who understand the process of export to this region”, – said the expert of the fruit and vegetable market in Eastern Europe Tatiana Getman.