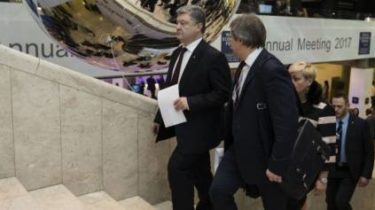 President of Ukraine Petro Poroshenko agreed with the President of Switzerland, the Director of the center on cooperation for the return of Ukraine frozen illegally taken by the previous government assets.

About it the head of state spoke at the world economic forum in Davos, reports UNIAN.

To achieve positive changes in this matter will spur the work of the competent authorities of both countries to cooperate for the return of the removed officials of times of Yanukovych assets.

Poroshenko called it a threat to the world from Russia, which will help to overcome Ukraine

Poroshenko also thanked the Swiss for an important role of their country in the solution of humanitarian problems related to the conflict in the Donbas.

“Separately, noted the dynamic development of bilateral cooperation, as evidenced by the growth of bilateral trade and the increase of Swiss investments in the Ukrainian economy”, – stated in the message.

Poroshenko also said that the introduction of visa-free regime with Switzerland (a country not included in the EU – ed.) will have a positive impact on the Ukrainians.