The vet, which operates with 4-month-old daughter “hands on”, amazed the Network 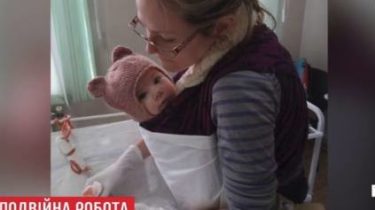 The work goes on, the mother is a surgeon in Ternopil. Moreover, the woman is a veterinarian operates with baby heart. She parked the four-month daughter in a sling to free your hands, and takes up a scalpel. The woman continued professional activity within a month after birth, says TSN.16.45.

A photo of mom, a veterinarian in the operating blew up the Network. They posted a volunteer, which deals with stray dogs.

“I have Elena said, “You can do it, you will be easy to do it,” and she says if I cook at home with a baby, I’m taking out the trash, go to the store that prevents me to do the surgery,” says the volunteer.

33-year-old Elena Fedorkiw the job comes with a little daughter Alina. Senior two year old Sasha was left at home with her husband. Today Elena will operate in Topeka. Owners are asked to appease his attraction to the opposite sex.

While a dog is prepared for surgery, Elena sterilize tools. The owner of a Topic sees the baby and wonders.

The doctor parked the four-month daughter in a sling to free your hands, and takes up a scalpel. Thus mother continued professional activity within a month after birth. The entire pregnancy she also operated. 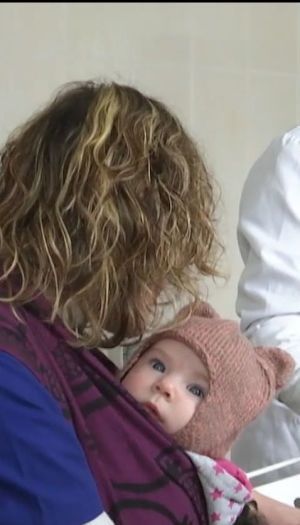 Alina four-month-old puppy is not frightened. Quietly watching, perched on the mother in a sling. She is breastfed, sleeps more often, and my mother uses it.

“Waking up when you’re hungry, when she needs to use the bathroom, I managed during this period to perform the operation, to wash, to clean,” says the vet.

The dog was injected with the anesthesia, he almost fell asleep. Alina do not want to sleep, but mom knows better.

Colleague Ilya, who assists her, said – third “doctor” in a sling not stopping him. Assures that he will have children, too, from childhood to accustom them to the profession.

Alina did not sleep, so start three.

During a break mom has lulls daughter dancing near the operating table. The operation lasted about twenty minutes. Topic and Alina sleep. Elena and Ilya are working. A woman to imagine holding a baby weighing seven kilograms. And so at least three times a week. Sure, her baby there is no danger here.

“Believe me, I’m operating here by herself disinfect, wash, perhaps cleaner than some people’s homes”, says the woman.

Outside sling wrapped with a clean cloth, sterile and for the dog.

However, Elena admits – to operate together with her daughter can not long, as the girl becomes more severe and mobile. Therefore, he says, will continue to work with two young children. But to leave the job will not be exact.