In the capital illegally work more than fifteen hundred Kiosks 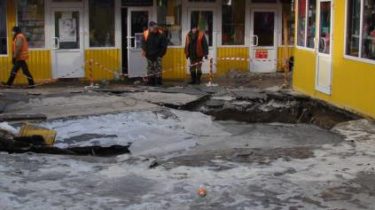 In Kiev still illegally work in excess of fifteen thousands of Kiosks that pose a threat to people who work there and live nearby.

“According to statistics 2017, in the capital illegally established 1732 detected object. Of these, 1239 located in the protected zones of water utilities, and 493 in security zones of objects of sewage. Of them for the year employees “Kyivvodocanal” dismantled or moved about 90 buildings”, – stated in the message.

In the river embankment was removed a huge floating IAF

It is noted that the MAF preventing the rapid elimination of accidents in case of breaking the tube, that is why the “Kyivvodocanal” calls to demolish or move the structure from the buffer zone networks.

Mafov owners will be responsible for the lack of water supply from the residents of homes that are located nearby, if you happen to crash the network, and a temporary structure will need to carry out liquidation activities.

We will remind, in Kiev the evening of December 29 near the bus station “Vydubychi” there was a fire – lit up the Mafs.