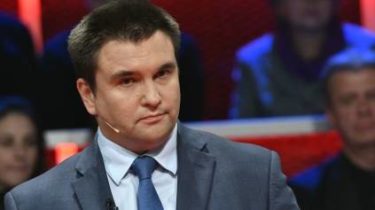 “Kremlin report” USA should force Russia to agree to the stationing of a real peacekeeping mission in the Donbas.

“Unfortunately, during the meeting (special envoy of the U.S. state Department on Affairs Kurt Volker and assistant to the President of the Russian Federation Vladislav Surkov – approx.ed.), there has been no result, but we will consistently press with the aim of implementation of the logic of the road map (implementation of the Minsk agreements), and hope that recent events, in particular, on the American side, too, shall we say, “help” to understand that it (Russia) proposals as body guards for the SMM have no meaning, and you need a real peacekeeping mission,” he said.

According to Klimkin, it should not interfere with the SMM work in peace, and we must “give to the peacekeepers, but the real peacekeepers to take control of the situation in the occupied territories”.

Recall, the U.S. Treasury Department presented to Congress, “the Kremlin report in the paper included 210 names: 114 high officials of the Russian Federation and heads of state companies and 96 of the oligarchs. In particular, the list includes the leadership of the presidential administration of the Russian Federation, among which Anton Vaino, Alexei Gromov, Dmitry Peskov, Vladislav Surkov. Also on the list were the Chairman of the Federation Council of the Federal Assembly of the Russian Federation Valentina Matviyenko, Chairman of the state Duma Vyacheslav Volodin, Prime Minister Dmitry Medvedev, the head of “Rosneft” Igor Sechin, the head of “Gazprom” Alexey Miller, the head of the foreign intelligence Service Sergei Naryshkin and the Director of the FSB Alexander Bortnikov.

According to the press Secretary of Russian President Dmitry Peskov, using a “Kremlin report” Washington is trying to put Putin at odds with the Russian business elite his preparation – “it is a direct and obvious attempt to coincide with some action to the elections to influence them”.