The bloody dispersal of students on Maidan: GPU filed a case against the commander of a platoon of “Golden Eagle” 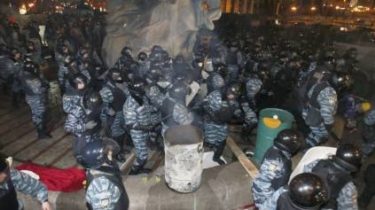 The General Prosecutor’s office sent to the Shevchenko district court of Kyiv indictment against the former platoon commander of the Kiev regiment “Berkut” on the facts of the crime of counter-protests during Euromaidan on the night of 30 November 2013 in the center of Kiev.

“During the preliminary investigation collected enough evidence to charge the former commander of a platoon of No. 2 operational company No. 4, of the regiment of special police “Berkut”, a subordinate of GU MVD of Ukraine in Kiev, in illegal, in the execution of manifestly criminal order committed by a group of persons, obstruction of meetings, rallies official with physical violence, and intentional abuse of power and official authority, accompanied by violence, use of special tools, painful and offensive to personal dignity of the victims actions”, – is spoken in the message of the Prosecutor General.

The General Prosecutor’s office reminds that this episode of counter protests is reported about suspicion in a total of 20 persons, including former President of Ukraine Viktor Yanukovych Secretary of the national security and defense, and his Deputy, the then Chairman of the KSCA, the chief GU MVD of Ukraine in Kiev, his Deputy and other law enforcement officers.

The results of the pre-trial investigation in court in March 2015 to listen to regarding indictments: former Chairman of the Kyiv city state administration, two Deputy commanders of the regiment MOP “eagle”, two commanders and a Deputy commander of a different mouth PMOP “Berkut”, with a December 2016 in respect of the former chief of the public security Department of the Kiev police, since June of 2017 in respect of the current platoon commander of a regiment of special police GU NP in Kiev

Also as part of pre-trial investigations identify other organizers and performers of crimes committed during these events.