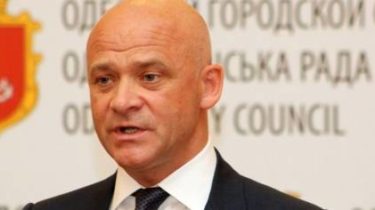 The mayor of Odessa Gennady Trukhanov went on vacation and in General for more than a month not appear at work.

Acting mayor Anatoly Orlovsky signed a decree about the holiday at its own expense, Trukhanov, in the near future the document should appear on the website of the city hall, reports “Interfax-Ukraine”.

The next day, when the mayor of Odessa had to go to work, acting as Orlovsky continued his vacation for three more days. But on January 22 Trukhanov in Odessa is not there – he went on a business trip to the capital of Greece, Athens with the purpose of “conducting business negotiations on development cooperation”.

The media found evidence of the presence of the mayor of Odessa, Trukhanov Russian citizenship

After Greece Truhanov went to another foreign trip to Davos to attend the world economic forum. He had to go to work on January 29.

Last year Trukhanov seven times took vacation, including at their own expense.

Recently, the former mayor of Odessa Eduard Gurvits declared that Trukhanov is not returned from leave because of the investigation NABS relative to Odessa airport and the firm’s factory “region”.

We will remind, in October 2017, the detectives of the National anti-corruption Bureau searched the office and the room of the mayor of Odessa Gennady Trukhanov. NABU explained that the searches are connected with two industries – relative to the appropriation of funds during the construction of the roads and regarding the privatization of the Odessa airport, with the result that, in the opinion of the investigators, the state suffered damage of more than UAH 100 million.