The money was more profitable to put on deposits in UAH, than in dollars – Deputy Chairman of the NBU 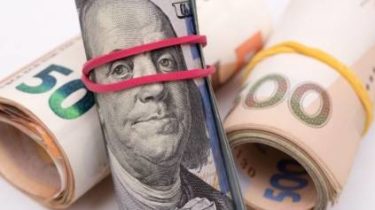 During 2017, in Ukraine it is more profitable to keep savings in deposits in UAH, than in dollars. After all, interest rates in national currency was almost five times higher than in dollars.

About it in interview “Today” told the Deputy Chairman of the national Bank Dmitry Sologub.

“I understand that people are concerned about the dollar, because many see it as a way to keep savings. But I want to draw attention to something. If a person bought a dollar 27.2 hryvnia, kept him at home under the pillow and would sell him now, he’d be rich, only a few percent. If a sober assessment of the figures, the hryvnia has depreciated over the year by only 3%. But if he did not buy dollars, and put the hryvnia on the Deposit, he would have earned during the same period 14%,” said Sologub.

He notes that “every person is free to decide in what currency to keep their money. But I like a man who for many years engaged in financial matters, talking to their friends, neighbors, last year was more profitable to invest in local currency than the dollar.”

Many Ukrainians fear the next financial crisis and therefore keep their savings in foreign currency.

“I often hear in response: Yes, while it was stable, but next year will be again a big devaluation? So it is better I still watch the dollar. And that is a reflection of the situation that occurred in Ukraine in the last 10-15 years. Crisis, everything stopped. Then started to grow, but the economic policy is again focused on short-term goals. The result is a new financial crisis. And, as one of my friends, the squirrel went to the next round. Therefore, our task today – to ensure consistent policy, so that Ukraine can at least 5-10 years to survive without major crises. It is very much going to change people’s attitude to the national currency, and confidence in the banking system. Investors will understand that they are unable to plan something here in the next 10 years. People will again begin to actively open the hryvnia deposits. This is a vital task that we must perform in the near future”, – said the Deputy Chairman of the NBU.

The dollar will depend on many factors – the growth of the Ukrainian economy, global trends, granting Ukraine the next loan tranche from the IMF. At the same time, the regulator will continue the monetary policy of a floating exchange rate and, if necessary, will be issued on the interbank market with interventions. This is almost 19 billion dollars of international reserves.

“The exchange rate is only one part of the economic situation in the country. And not even the main one. Although people hipertrofia its value, considering it the main. It is not necessary to replace the concept of prices of goods you buy every day, the price of one currency, even the most important for the economy of the country. If the decision on the introduction of a floating exchange rate was adopted earlier in 2008 or 2009, the devaluation we would have been much smoother. And when something long hold, and then released, the effect of a compressed spring, which “shoots”. In such cases always happen some distortions, imbalances. This fact is proved by examples of many countries,” said Sologub.

Ultimately the exchange rate is determined by the state of the economy.

“But in the short term, it always affects the psychological effects. And the policy is now conducted by the national Bank of Ukraine, aimed to exchange rate fluctuations correspond to the fundamental parameters of the Ukrainian economy, export-import. And what we see in the foreign exchange market, it is including the psychological factor,” said Sologub.