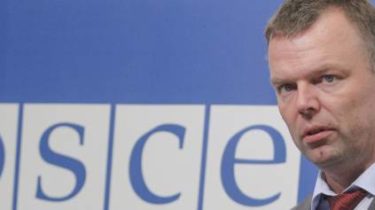 This week in the zone of the antiterrorist operation in the Donbas, the number of ceasefire violations decreased by 25% compared to last week.

This was stated by Deputy head of the OSCE mission in Ukraine Alexander Hg at a press briefing on 2 February, reports LB.ua.

Also decreased the number of cases of use of prohibited by the Minsk agreement heavy weapons. Last week, the OSCE observers have recorded 180 such cases this week – 33 (28 cases, the use of artillery and 5 mortars).

According to the BBC, 80% of attacks occur in areas Avdeevka, Yasynuvata, the Donetsk airport and the South of Svetlodarsk.

We will remind, Alexander hug during a press briefing on 23 January reported that the parties in the Donbas actively arm themselves and dominate the territory that indicates preparation for the escalation of the conflict in the near future. He noted that the militants and military APU actively digging along the line of demarcation. Representatives of the OSCE recorded military equipment, which stands on the firing positions from both ORDO, and the government-controlled Ukrainian territory.