Under Yasinovataya terrorists fired at the OSCE observers 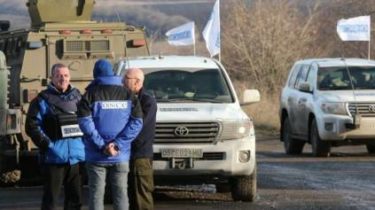 Near controlled by militants “DNR” Yasinovataya terrorists fired on a group of five observers of the OSCE SMM.

“At 14:08 five members of the SMM were standing between the vehicles, the SMM, when I heard the whistle three bullets flying from East to West over their heads and saw one of the bullets that was lying for 10-15 m to the East of the observers,” – said in the message.

It is noted that the members of the SMM left the area and got to a safe place stay in Donetsk.

Recall that in the ATO zone in Donbass for 2 Feb three Ukrainian servicemen were injured.