In Kiev protested against the “National teams” 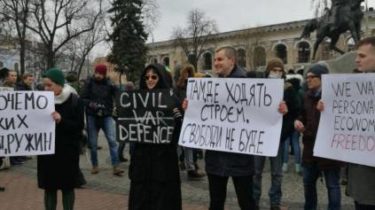 In Kiev held a March-rally against the public organization “National militia”.

The protesters opposed the legitimization of paramilitary movements in Ukraine. Protesters took to the streets with placards “We don’t want any teams”, “where systems go, freedom will not.” They beat drums and chanted “For a society without violence!”.

Several dozen people came to the Post area in the center of the city, where the protest against the new organization.

“National squad”: Who are the nationalists, who resented the social network and threaten to use force

Subsequently the President of Ukraine Sergey Knyazev said that public organizations and enterprises do not have the right to militarization. Since the monopoly on the protection of public order with the use of weapons belongs to the National police.