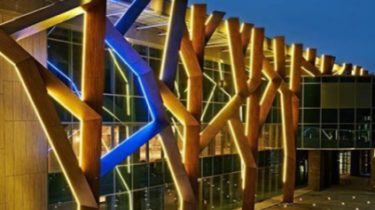 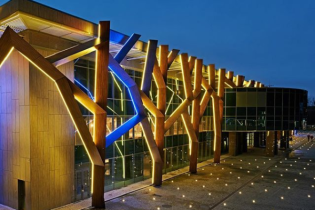 Kiev exhibition centre, which hosted a number of events Eurovision-2017 owned by the registered company in Hertfordshire.

According to a BBC investigation, at least 1.2 billion pounds was sent through companies registered at the same address, where is Potters Bar.
The Department for business said that the information about the company in the UK “is under constant control.”

Congress and exhibition center “the Park” – a stylish and modernist building in the center of Kiev. This place was held the official party Eurovision-2017.
Participants and their families from all over the continent danced and drank until dawn on the roof with spectacular views of the Dnieper river.

Ukrainian company, which owns the building “Park”, owned by the British company called Fineroad Business LLP, registered in Potters Bar.
This company is affiliated with two shadow companies registered in the Caribbean island of Nevis.

Attempt number two: Russia on “the Eurovision-2018” will be presented by a girl in a wheelchair

Was calculated with the owners of the building of the state broadcaster.

Profits, obviously, were in the pockets of people associated closely with the regime of former President Viktor Yanukovych, who four years ago left the country. In 2017, a Ukrainian court found it reasonable to believe that the “Park” was funded by money stolen from the state.

It is known that at the address of the registered office Potters Bar, legally more than 100 firms involved in international schemes of money laundering – most of which is connected with dirty money from Russia and other former Soviet States.

“British companies “provide the role of intermediaries in global corruption” – says Duncan Haimes, policy Director of Transparency International. Affiliated with these companies owners registered in secret jurisdictions such as Seychelles or Belize.

As writes the edition, the owner of the “Park” is Sergei Moscow, registration address which is located in the village near the conflict zone in the Donbass. At the moment Moscow is located in Germany. He denied any participation in the activities Fineroad Business. However, he later confirmed that he is the main shareholder of the company. For reasons of “commercial confidentiality” he did not say what the company does and how much it cost to buy shares.

He is confident that the company is not involved in money laundering, but published after the BBC investigation will have to investigate.

Press Secretary of the Department of business, energy and industrial strategy, said: “the UK has one of the most transparent and accessible procedures of registration of companies in the world – last year it was two billion times, which means that information about companies is under constant control.”