In Kiev was renamed the metro station “Petrivka” 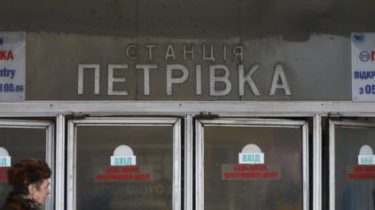 “Today at the plenary session of the Kyiv city Council deputies supported the renaming of the station and the line of the Kiev metro. The metro station “Petrovka” was renamed “Pochayna” according to the name of the river “pochayna”, which is one of the oldest in Kiev”, – stated in the message.

Besides the new name given to “Kurenivsko-Chervonoarmiiska” (blue) line of the Moscow subway – “Obolon-Teremkovskaya”.

“The previous name reflected only the initial draft of the line, and now it does not pass through the terrain Kurenyovka. The second part of the name (“red”) has ceased to comply with the aboveground place names after renaming the station “red army” in the “Palace of Ukraine” in 1993. In addition, in November 2014 Krasnoarmeyskaya street was returned its historical name Bolshaya Vasilkovskaya” – said in the city Council.

As noted, the decision on renaming was supported by 70 deputies.

We will remind, earlier the Kyiv city Rada agreed to rename the Moscow bridge in North Park “Friendship of peoples” in “Murom” and a number of other Metropolitan facilities. Also the name of a receive object, which is still the name had not.