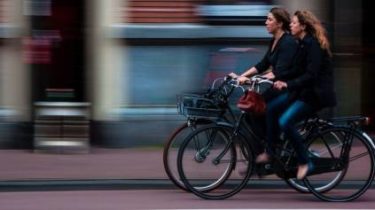 For greater mobility of residents and promote healthy lifestyles in the KSCA approved the Concept development of Cycling infrastructure says on the site.

Reportedly, the city government expects that by 2025 the number of people who routinely will prefer the Bicycle instead of public transport will increase by 5%.

“The concept of development of Cycling infrastructure in Kyiv repeatedly discussed in open meetings with participation of public organizations, citizens and guests of the capital. Together we have developed a document, which analysed the global and Ukrainian experience in this field. A new strategy for the long run and it is able to improve urban mobility and to integrate the Bicycle into the overall system of urban transport infrastructure,” – said the chief architect of the city Alexander Svistunov.

According to him, a new concept, among other things, will contribute to the improvement of the ecological situation in the city, will reduce the financial burden on the budget during the reconstruction of roads and highways will provide an opportunity to attract new investment, increase tourist attractiveness of Kyiv and will bring it closer to the standards of the European countries.

“The implementation of the Concept predicts a further reduction of annual transport losses from 8.4 to 16.4 billion annually,” he added.

This news has responded to the community “Kyiv is a Cycling city”. There are very happy possible the emergence of new Bicycle lanes and routes, and I thank all those involved in the development of the Concept.

Today wyznaczy of pondus for us velosprint.. At the plenary Sadan Kyiv Msica glad rdenny “For” 96 de…

We will remind, in the autumn in the capital held a protest rally cyclists “Enough to kill us”. The reason for the gathering of activists and cyclists in the death of a cyclist in a traffic accident. Under the walls of the KSCA people announced to the authorities his vision of solutions to existing problems, which, alas, many.

Video settings the capital, volunteers are taught how cyclists should behave on the road