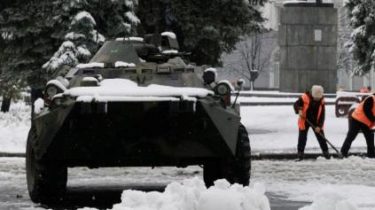 Russia continues to increase the combat capability of its forces in the occupied territories of Donbass.

This was stated by the speaker of the Ministry of defense of Ukraine on ATO Colonel Dmitry Gutsulyak at a briefing.

“From 5 to 11 February, hundreds of officers of the 8th army of the southern military district of the armed forces of the Russian Federation has joined health check and readiness assessment of the possibilities of the formations of the so-called “2nd army corps” Russian occupation troops to perform tasks,” he said.

According to Huculak, the so-called “1st army corps of” occupiers will last from 10 to 20 February. Besides, the Russian command ordered the local occupation administration to clarify the ability of fake military and law enforcement authorities to identify people and weapons to strengthen the so-called “advanced units”.

“The press center of the ATO headquarters reported about significant activation of the Russian occupation forces… Since the beginning of February the Russian militants and the occupation forces began to behave more aggressively with local residents and increased the number of provocative shelling of settlements, blaming the ATO forces”, – said the representative of the Ministry of defense.

Earlier, the OSCE mission recorded an increase in violations of the ceasefire in the Donetsk and Lugansk regions. Also, the militants tried to fire the drone of the OSCE.