Former chief of staff, said those who wanted to suppress the Euromaidan army Ex-chief of staff Vladimir Zaman during questioning on charges of treason Viktor Yanukovych said that in February 2014, a top defense Ministry, the SBU and the GPU tried to send military against activists on Euromaidan.

According to him attempts to prepare the order for the use of the APU was during the week, writes up. Exercised their then-defense Minister Pavel Lebedev supposedly to “restore constitutional order” in the capital.

“The political leadership tried to get me to send troops to Kiev, to get to do it illegally. It was about the involvement of the Armed forces to strengthen facilities, the establishment of constitutional order in Kiev”, – quotes “Interfax-Ukraine” a quote Zaman.

He claims that he only agreed on the transfer of military transport helicopters Mi-8 in the city of Vasilkov, as it was required by law.

Also during the interrogation, he said that during Maidan law enforcers wanted to relocate to Kiev division, which was preparing for Crimea.

“After the altercation (with the ex-defense Minister Lebedev – Ed.) I stated that this order does not provide. The same day I was told that the President of Ukraine signed the decree about my dismissal,” added Zaman.

Earlier, during interrogation the former chief of General staff – chief of the Armed forces of Ukraine Volodymyr Zamana said that Viktor Yanukovych from the post of the President of Ukraine, the law had no right to ask Russia about the introduction of its troops their country.

Investigate the case in absentia. This decision was made by Pechersky court. The fugitive President reacted immediately. In the network’s press Secretary, his son issued a letter in which Yanukovych calls the case fabricated and complains that his attorneys did not allow for meetings. In executions on the Maidan and the annexation of Crimea by Russia is blaming current officials. 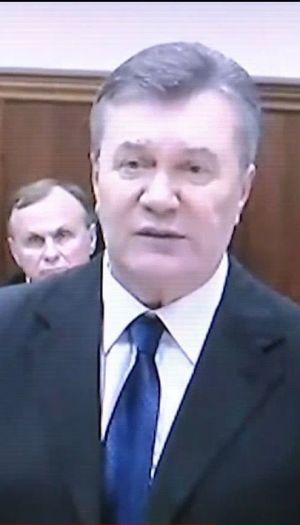