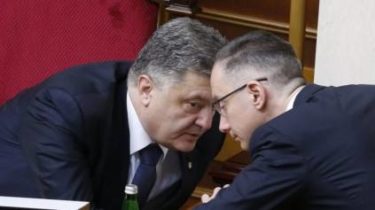 Chief economic Advisor to the President of Ukraine Petro Poroshenko Borys Lozhkin was removed from the national investment Council a few hours after the journalists of the TV channel Al Jazeera has asked politicians to review regarding the sale of United Media Holding (UMH) in 2013.

On Thursday, February 8, according to the article on the website of Al Jazeera.

The journalists claim that Poroshenko and Lozhkin during the sale of UMH has received tens of millions of dollars of “dirty money” from oligarch Sergei Kurchenko, who played a key role in the criminal scheme of regime of Viktor Yanukovych.

Austrian law enforcement is investigating the transaction in the amount of $ 130 million, which became part of the agreement, suspecting that the money was received as a result of money laundering. Later they closed the case, stating that he had not received any evidence that “money has been dirty”, partly due to the fact that they have not received any information from their Ukrainian colleagues.

But the journalists of Al Jazeera claim to have in their possession a document that shows that the money paid for the purchase of UMH has been derived from loans secured stolen assets.

In Austria, closed the case on money laundering against Kurchenko, Lozhkin and for GPU – SMI

“Kurchenko put up $ 50 million as collateral for this loan. However, earlier Ukrainian secret court order made public by Al Jazeera in January, showed that the money was held in three Cypriot companies that were part of a vast “criminal organization” in the case of Yanukovych,” — journalists write.

Al Jazeera notes that this means that almost a third of the money that Lozhkin and his investors received from the sale of UMH, had illegal origin.

“You can’t assume that the sellers knew about the doubtful mortgage loan, made by Kurchenko, but there are questions about whether there were at that time conducted due diligence,” – said in the investigation.

Al Jazeera also claims that Petro Poroshenko was owned by 3% of UMH at the time of its sale Kurchenko, although the President had previously stated that he sold his stake a few months prior to the transaction. If so, then Poroshenko from the sale of UMH has received $ 15 million, writes Al Jazeera.

Representative Poroshenko, in comments to Al Jazeera said that Poroshenko did not own shares of UMH at the time of sale, therefore, did not receive any funds from the transaction. It is reported that the channel is waiting for the review Lozhkin.

On 7 February it became known that Peter Poroshenko withdrew from the National investment Council Boris Lozhkin. Al Jazeera journalists connect it with its investigation, but Lozhkin on his page in Facebook wrote that she wants to focus on his own business.

Today ends an important stage in my life. From this day on I am no longer Secretary of the National investment…

UMH group — Ukrainian international multimedia group, founded by Boris Lozhkin in the late 1990-ies. In 2010, Petro Poroshenko received a share in the UMH. In 2013 Lozhkin announced the conclusion of the sale of 98 % of the shares of UMH group of companies VETEK, owned by Serhiy Kurchenko. Estimation of the amount of the transaction, which were published in the press — $ 450-500 million