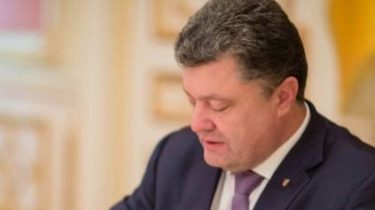 President of Ukraine Petro Poroshenko has signed a decree about introduction in action of the decision of the Council of national security and defense of Ukraine on counteraction to information aggression of Russia.

Decree No. 25/2018 of 9 February published on the website of the President of Ukraine.

“To enact the decision of national security Council and defense of Ukraine from 26 January 2018 “On additional measures on counteraction to information aggression of the Russian Federation”, – stated in the decree.

Put into effect the NSDC decision is added for internal use. Control over its execution rests with the Secretary of the NSDC Oleksandr Turchynov.

We will remind, the Deputy Secretary of the NSDC Alexander Litvinenko said that Russia may resort to large-scale military aggression against Ukraine if it fails to destabilize the situation in the country.According to him, the last time Russia had created two new armies – 8th and 20th combined-arms army. There are three new divisions – 150-I, 3-I, 144. Created a new division in the Caucasus. In addition, Russia is rapidly perevooruzhit air army of the southern and Western military districts, sending out new planes.