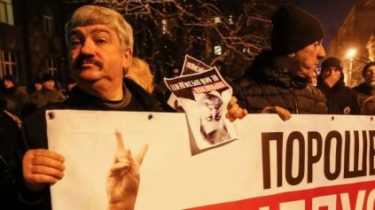 On Bankova street near the presidential Administration is campaign supporters deported from Ukraine, ex-head of the Odessa Mikheil Saakashvili. They came from the Institute, where the building of the NBU, said in the story TSN.19:30.

Dissatisfied with the expulsion Saakashvili came a few dozen – significantly, most of the people on Bankova are journalists, bloggers, strimel and law enforcement officers. The action is calm, except for one episode when the man approached the cordon of representatives of the National guard and started shouting obscenities to insult the militiamen and provoke them. At his arrest there was a small fight.

Videomega security forces and supporters of Saakashvili clashed on Bank

Saakashvili’s supporters after his deportation moved to Bankova street, to protest the actions of the authorities. One of the activists began to speak out aggressively in the direction of law enforcement, security forces overpowered him, and then there was a fight. 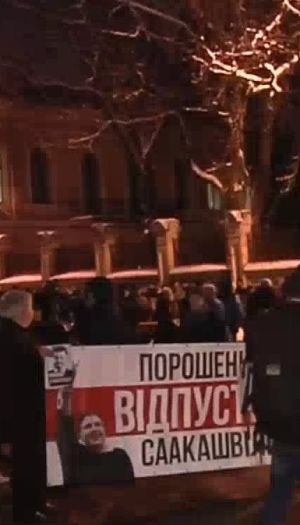 Subsequently joined a group of men in black uniforms without any insignia, but in disguise. Role they did not explain, but called themselves supporters of right-wing views. “It is a revolutionary right-wing forces of Ukraine”, – said one of the guys. And answering the question of whether they plan any military action and what will be done in the event of clashes with police, one of the men in uniform said: “We will tell poems, sing something.”

From time to time among the activists appeared policy, in particular supporter of Mikheil Saakashvili, the former Deputy Prosecutor General Davit Sakvarelidze. However, none of them voiced a clear plan of action and the prospects for a rally on Bankova. And although people have brought speakers and speakers that are not indicative of the intention of a quick completion of the protest, the crowd debating about whether the activists to sleep on the street or will move to a tent city near the Parliament.